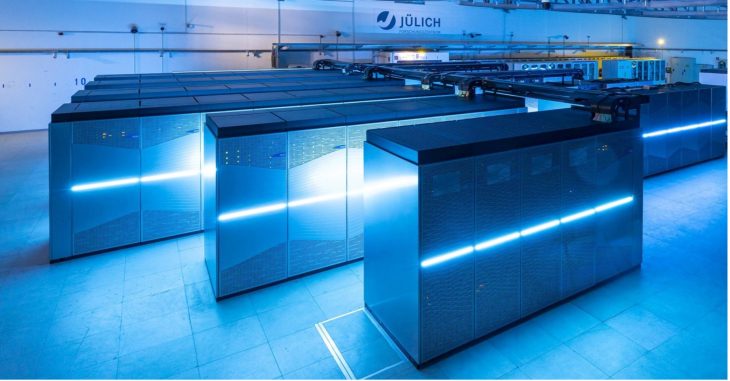 It was finally decided in 2022: Forschungszentrum Jülich will be home to Europe’s first exascale computer. The supercomputer is set to be the first in Europe to surpass the threshold of one trillion (“1” followed by 18 zeros) calculations per second. The system will be acquired by the European supercomputing initiative EuroHPC JU. The exascale computer should help to solve important and urgent scientific questions regarding, for example, climate change, how to combat pandemics, and sustainable energy production, while also enabling the intensive use of artificial intelligence and the analysis of large data volumes. The overall costs for the system amount to 500 million euros. Of this total, 250 million euros is being provided by EuroHPC JU and a further 250 million euros in equal parts by the German Federal Ministry of Education and Research (BMBF) and the Ministry of Culture and Science of the State of North Rhine-Westphalia (MKW NRW).

The computer named JUPITER (short for “Joint Undertaking Pioneer for Innovative and Transformative Exascale Research”) will be installed 2023/2024 on the campus of Forschungszentrum Jülich. It is intended that the system will be operated by the Jülich Supercomputing Centre (JSC), whose supercomputers JUWELS and JURECA currently rank among the most powerful in the world. JSC has participated in the application procedure for a high-end supercomputer as a member of the Gauss Centre for Supercomputing (GCS), an association of the three German national supercomputing centres JSC in Jülich, High Performance Computing Stuttgart (HLRS), and Leibniz Computing Centre (LRZ) in Garching. The competition was organized by the European supercomputing initiative EuroHPC JU, which was formed by the European Union together with European countries and private companies.

JUPITER is now set to become the first European supercomputer to make the leap into the exascale class. In terms of computing power, it will be more powerful that 5 million modern laptops of PCs. Just like Jülich’s current supercomputer JUWELS, JUPITER will be based on a dynamic, modular supercomputing architecture, which Forschungszentrum Jülich developed together with European and international partners in the EU’s DEEP research projects.

In a modular supercomputer, various computing modules are coupled together. This enables program parts of complex simulations to be distributed over several modules, ensuring that the various hardware properties can be optimally utilized in each case. Its modular construction also means that the system is well prepared for integrating future technologies such as quantum computing or neurotrophic modules, which emulate the neural structure of a biological brain. 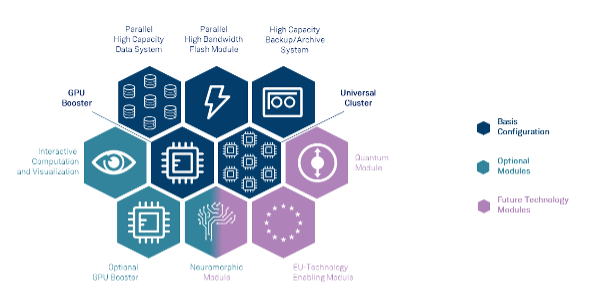 Figure Modular Supercomputing Architecture: Computing and storage modules of the exascale computer in its basis configuration (blue) as well as optional modules (green) and modules for future technologies (purple) as possible extensions.

One major challenge is the energy that is required for such large computing power. The average power is anticipated to be up to 15 megawatts. JUPITER has been designed as a “green” supercomputer and will be powered by green electricity. The envisaged warm water cooling system should help to ensure that JUPITER achieves the highest efficiency values. At the same time, the cooling technology opens up the possibility of intelligently using the waste heat  that is produced. For example, just like its predecessor system JUWELS, JUPITER will be connected to the new low-temperature network on the Forschungszentrum Jülich campus. Further potential applications for the waste heat from JUPITER are currently being investigated by Forschungszentrum Jülich.

The first image is JUWELS: Germany’s fastest supercomputer JUWELS at Forschungszentrum Jülich, which is funded in equal parts by the Federal Ministry of Education and Research (BMBF) and the Ministry of Culture and Science of the State of North Rhine-Westphalia (MKW NRW) via the Gauss Centre for Supercomputing (GCS). (Copyright: Forschungszentrum Jülich / Sascha Kreklau)